Under Desert Skies: How Tucson Mapped the Way to the Moon and Planets (Paperback) 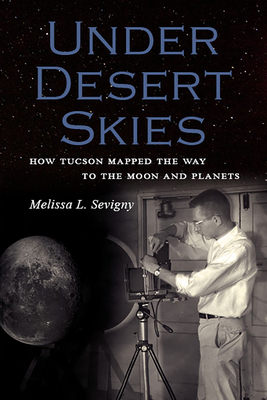 Under Desert Skies: How Tucson Mapped the Way to the Moon and Planets (Paperback)


Email or call for price.
President Kennedy’s announcement that an American would walk on the Moon before the end of the 1960s took the scientific world by surprise. The study of the Moon and planets had long fallen out of favor with astronomers: they were the stuff of science fiction, not science.

An upstart planetary laboratory in Tucson would play a vital role in the nation’s grand new venture, and in doing so, it would help create the field of planetary science. Founded by Gerard P. Kuiper in 1960, the Lunar and Planetary Laboratory (LPL) at the University of Arizona broke free from traditional astronomical techniques to embrace a wide range of disciplines necessary to the study of planets, including geology, atmospheric sciences, and the elegant emerging technology of spacecraft. Brash, optimistic young students crafted a unique sense of camaraderie in the fledgling institution. Driven by curiosity and imagination, LPL scientists lived through—and, indeed, made happen—the shattering transition in which Earth’s nearest neighbors became more than simple points of light in the sky.

Under Desert Skies tells the story of how a small corner of Arizona became Earth’s ambassador to space. From early efforts to reach the Moon to the first glimpses of Mars’s bleak horizons and Titan’s swirling atmosphere to the latest ambitious plans to touch an asteroid, LPL’s history encompasses humanity’s unfolding knowledge about our place in the universe.
Melissa L. Sevigny grew up in Tucson, Arizona, with a deep love of the geology, ecology, and the clear desert skies of the Southwest. She is science and technology reporter for KNAU (Arizona Public Radio) in Flagstaff. Minor Planet (15624) Lamberton is named in her honor.
“Through a series of engaging interviews, Melissa Sevigny guides her readers on an amazing journey of solar system exploration in a way that captures the pioneering spirit of the Lunar and Planetary Lab’s researchers. It is a must-read for anybody interested in humanity’s quest to understand our origins and place in the universe.” —Dante Lauretta, Professor of Planetary Science, University of Arizona

“A fascinating story of how a small university department became a major powerhouse in our exploration of the solar system, and of how our knowledge of the solar system blossomed with the space age.” —Derek Sears, Space Science and Astrobiology Division, NASA Ames Research Center

“Under Desert Skies tells the story of how early pioneers like Gerard Kuiper and Ewen Whitaker helped America succeed in the quest for the Moon, and encouraged following generations of space scientists to unlock the secrets of the solar system.” —Alan Fischer, Planetary Science Institute

“Beyond their awe-inspiring accomplishments, these UA faculty epitomize the ‘inexhaustible sense of wonder’ that Sevigny considers the heart of planetary science.”—The Journal of Arizona History

“Tells the story of how a small corner of Arizona became Earth’s ambassador to space.”—Lunar and Planetary Information Bulletin

“Under Desert Skies presents an institutional history of the Lunar and Planetary Laboratory (LPL) at the University of Arizona in Tucson: a key center for planetary sciences today and throughout its sixty-year history.” —Isis Review