Eyewitness: My Journey to the Hague (Hardcover) 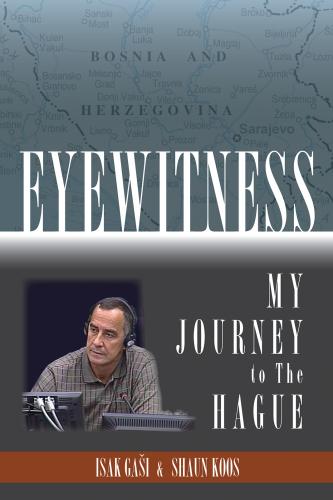 Eyewitness: My Journey to the Hague (Hardcover)

Before April of 1992, Isak Gasi was a world-class athlete and community leader, content to live a quiet life with his wife and infant daughter in the Bosnian city of Brčko. He never could have dreamed that within just a few short years, he would come face to face with Serbian President Slobodan Milosevic and others indicted for war crimes, as a lead prosecution witness at the International Criminal Trials for the Former Yugoslavia.

Eyewitness is an accessible history that joins the personal story of a man who was close to the action with the war's broader historical and political contexts. In a world still challenged by ethnic violence and refugee response, this story of justice, forgiveness, and truth will resonate with readers for many years to come.

Isak Gaši is a former world-class canoeist who represented Yugoslavia internationally for more than a decade. His Bosnian War experiences propelled him into a prominent and ongoing role as a witness for the prosecution at The Hague tribunal. He has lived in the United States for the past sixteen years, working in a technical field. A devoted husband and father, he still canoes regularly, finding deep satisfaction in the interplay between a boat, a paddle, and the Columbia River’s eternal flow. Shaun Koos is a retired hospital executive who grew up in Minneapolis, Minnesota. After graduating magna cum laude from Carleton College, he earned a graduate degree from the University of Washington. He rowed in UW’s graduate program, feeling some connection to the school’s storied history and the boys in its 1936 boat. Shaun is a former member of the US canoe and kayak team, and the former Secretary of USA Canoe/Kayak. It was through canoeing that he met Isak Gaši. His primary interests as a writer are in historical biography and in exploring the motivations, mindsets, and actions of individuals who confront and surmount great challenges.
“This powerful personal story of an extraordinary individual who survived imprisonment and torture during the war in Bosnia in the 1990s, and then became one of the most important prosecution witnesses against Serb war criminals for the International Criminal Tribunal for the former Yugoslavia, deserves to be widely read.”
~ Adam Moore, Assistant Professor of Geography, UCLA, and author of "Peacebuilding in Practice: Local Experience in Two Bosnian Towns"

“The story of Isak Gaši is at the same time horribly ordinary and incredibly extraordinary. His experience of having his everyday existence in Yugoslavia and Bosnia interrupted by war—being arrested, viciously beaten, and becoming a refugee—is all too ordinary, and is a fate shared by hundreds of thousands of other people. Yet his story as an elite athlete; and the manner in which he was, with his wife’s courageous intervention, rescued from near certain death; and how he bravely went on to testify in some of the most important war crimes trials at the UN’s International Criminal Tribunal in The Hague, makes his story extraordinarily compelling. As such, this book richly deserves to be read widely by both the general public and by those readers particularly interested in the collapse of Yugoslavia and the ensuing wars of the 1990s.”
~ Christian Axebo Nielsen, Associate Professor, University of Aarhus in Denmark, specializing in Eastern European studies

“'Eyewitness' is captivating for a number of reasons. The story is well told. It’s history up close and personal. . . . What’s provocative and riveting, however, is the horrific struggle between good and evil that transcends Luka, Bosnia, and Yugoslavia, and mirrors what’s inside us all.”
~ June Darling, Ph.D., author of "Mind-Bending Chats with Great Thinkers" and "Becoming Artists of Life"