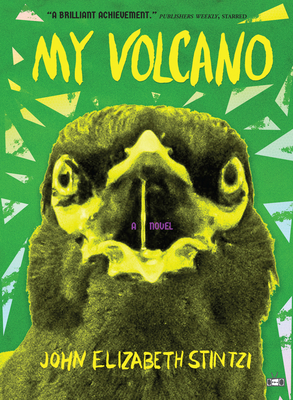 My Volcano is a kaleidoscopic portrait of a menagerie of characters, as they each undergo personal eruptions, while the Earth itself is constantly shifting. Parable, myth, science-fiction, eco-horror, My Volcano is a radical work of literary art, emerging as a subversive, intoxicating artistic statement by John Elizabeth Stintzi.

On June 2, 2016, a protrusion of rock growing from the Central Park Reservoir is spotted by a jogger. Three weeks later, when it finally stops growing, it's nearly two-and-a-half miles tall, and has been determined to be an active volcano.

As the volcano grows and then looms over New York, an eight-year-old boy in Mexico City finds himself transported 500 years into the past, where he witnesses the fall of the Aztec Empire; a Nigerian scholar in Tokyo studies a folktale about a woman of fire who descends a mountain and destroys an entire village; a white trans writer in Jersey City struggles to write a sci-fi novel about a thriving civilization on an impossible planet; a nurse tends to Syrian refugees in Greece while grappling with the trauma of living through the bombing of a hospital in Kunduz, Afghanistan; a nomadic farmer in Mongolia is stung by a bee, magically transforming him into a green, thorned, flowering creature that aspires to connect every living thing into its consciousness.

With its riveting and audacious vision, My Volcano is a tapestry on fire, a distorted and cinematic new work from the fiercely talented John Elizabeth Stintzi.