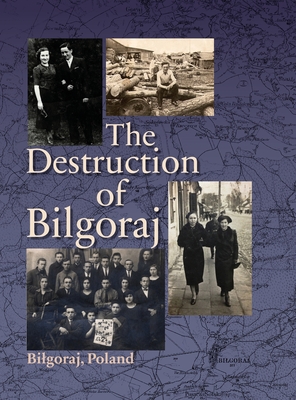 By A. Kronenberg (Editor), Nina Schwartz (Cover Design by), Jonathan Wind (Index by)

We know Bilgoraj's river and forest from the stories of I.B. Singer, who spent his early adulthood here.

Jews lived here since the late 14th century, and before the First World War, made up half its population. They owned grain and lumber mills, and worked as merchants, shoemakers, smiths, tailors, bakers, sieve makers, and printers. (The Kronenberg Press was known throughout Europe for its Hebrew books.) During the early 20th century, the community

In October 1939 Nazi soldiers entered the town and began a program of beatings, killings, and forced labor. In June 1940 a

ghetto was created; deportations to the camps began in spring 1942. With the liquidation of the ghetto and its last residents

But not to the creators of this book. On their behalf, editor Abraham Kronenberg wrote:

"We worked hard and produced a picture of our city and its dear Jews, its parties, institutions, and personalities. May we not forget what we had, and what will never again be."