The Ruins of Ani: A Journey to Armenia's Medieval Capital and its Legacy (Hardcover) 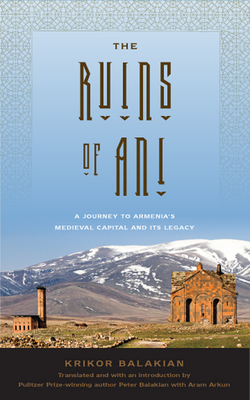 The Ruins of Ani: A Journey to Armenia's Medieval Capital and its Legacy (Hardcover)

From the tenth to the thirteenth centuries, the city of Ani was the jewel of the Armenian kingdom, renowned far and wide for its magnificent buildings. Known as the city of 1001 churches, Ani was a center for artistic innovation, and its architecture is a potential missing link between Byzantine and Gothic styles. By the fifteenth century, Ani was virtually abandoned, its stunning buildings left to crumble. Yet its ruins have remained a symbol of cultural accomplishment that looms large in the Armenian imagination.

The Ruins of Ani is a unique combination of history, art criticism, and travel memoir that takes readers on a thousand-year journey in search of past splendors. Today, Ani is a popular tourist site in Turkey, but the city has been falsified in its presentation by the Turkish government in order to erase Armenian history in the wake of the Armenian Genocide. This timely publication also raises questions about the preservation of major historic monuments in the face of post atrocity campaigns of cultural erasure.

Originally written by young priest Krikor Balakian in 1910, just a few years before the Armenian genocide, this book offers a powerful and poignant counterpart to Balakian’s acclaimed genocide memoir Armenian Golgotha. This new translation by the author’s great-nephew, Pulitzer Prize-winning poet Peter Balakian, eloquently renders the book’s vivid descriptions and lyrical prose into English. Including a new introduction that explores Ani’s continued relevance in the twenty-first century, The Ruins of Ani will give readers a new appreciation for this lost city’s status as a pinnacle of both Armenian civilization and human achievement.
KRIKOR BALAKIAN (1876–1934) was one of the leading Armenian intellectuals of his generation. One of the 250 cultural leaders arrested by Turkish officials in 1915, he survived four years in the killing fields of the Armenian genocide, chronicled in his memoir Armenian Golgotha. A member of the Armenian delegation to the 1919 Paris Peace Conference, he later served as pastor of the Armenian Church in Manchester and bishop of the Armenian Church of south France.

PETER BALAKIAN is the Donald M. and Constance H. Rebar Professor of the Humanities in the department of English at Colgate University in Hamilton, New York. He is the author of many books, including The Burning Tigris: The Armenian Genocide and America’s Response, winner of the Raphael Lemkin Prize; Black Dog of Fate, winner of the PEN/Albrand Award for Memoir; and Ozone Journal, winner of the Pulitzer Prize for Poetry.

ARAM ARKUN is the executive director of the Tekeyan Cultural Association and an assistant editor at the Armenian Mirror-Spectator.

"This fine English translation breathes new life into a crucial, and yet neglected source for the celebrated medieval Armenian city of Ani, and for the brief but important period of Russian control in the region."
— Christina Maranci

"Peter Balakian's translation and recasting of his great uncle's memoir combines sensitive Armenian religious and cultural history with a clear focus on the cultural dimension of genocide. It is a remarkable and invaluable study."
— Robert Jay Lifton

"This is an enthralling account of the 1909 pilgrimage of an Armenian priest to the ruins of the Armenian city of Ani. Introduced by his great-nephew, the distinguished poet Peter Balakian, this memoir is a powerful expression of Armenian pride and longing for the land on which they lived for a millennium. Written a bare six years before Ottoman forces carried out the Armenian genocide, this document underscores forcefully how central cultural destruction was and is in the unfolding of that crime against humanity."
— Jay Winter

“Vartabed Balakian describes Ani as an 'Armenian genius,' a title befitting of Balakian. His eye on the ancient capital is intricate and mournful, and creates a new depth post genocide.”
— Donna-Lee Frieze

"Krikor Balakian’s rhapsodic narrative is a scholarly, flowery mix of architectural history and a travelogue of his much-anticipated pilgrimage. He writes lovingly about church ornamentation and holy day services held among the architectural ruins; he also thunders against bloodthirsty marauders and unworthy, greedy priests in Armenia’s past. The text is accompanied by numerous richly toned photographs of Ani’s dramatic ruins, which are critical evidence of lost history."

"[The Ruins of Ani] documents the history, genius, and tragedy of the Armenian civilization as refracted through its ancient capital. It also illuminates one of those rare places that leaves visitors feeling they might have to dust off the word mystical to describe the experience."
— The Arts Fuse

"Balakian’s book explores both the ancient and modern versions of the city of Ani, unknown to many non-Armenians. The intertwined legacy of the Balakian family and their connection to a revered city provides a moving and enduring account of history."
— Armenian Weekly

"This book is a valuable contribution to the scholarly study of the art, architecture, and archaeology of Ani, and its translation into English will help it to reach a wider audience."
— Comitatus: A Journal of Medieval and Renaissance Studies

"This new edition of The Ruins of Ani is not merely an informative description of a dazzling city that became a 'great museum of the arts and crafts of Armenian antiquity'. It is also an intriguing document of trans-historical and cross-generational imagination. The 'richness and opulence' that 'always [aroused] the greed of conquering rulers” when Ani was in its prime have long vanished, but eyes are converging on the city once more.'"
— Times Literary Supplement