Pandemic, Inc.: Chasing the Capitalists and Thieves Who Got Rich While We Got Sick (Hardcover) 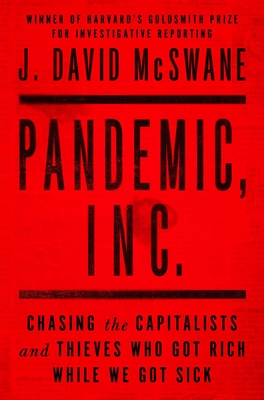 Pandemic, Inc.: Chasing the Capitalists and Thieves Who Got Rich While We Got Sick (Hardcover)

For readers of War Dogs and Bad Blood, an explosive look inside the rush to profit from the COVID-19 pandemic, from the award-winning ProPublica reporter who saw it firsthand.

The United States federal government has spent over $10 billion on medical protective wear and emergency supplies, yet as COVID-19 swept the nation, life-saving equipment such as masks, gloves, and ventilators was nearly impossible to find.

In this brilliant nonfiction thriller, award-winning investigative reporter J. David McSwane takes us behind the scenes to reveal how traders, contractors, and healthcare companies used one of the darkest moments in American history to fill their pockets. Determined to uncover how this was possible, he spent over a year on private jets and in secret warehouses, traveling from California to Chicago to Washington DC, to interview both the most treacherous of profiteers and the victims of their crimes.

Pandemic, Inc. is the story of the fraudster who signed a multi-million-dollar contract with the government to provide lifesaving PPE, and yet never came up with a single mask. The Navy admiral at the helm of the national hunt for additional medical resources. The Department of Health whistleblower who championed masks early on and was silenced by the government and conservative media. And the politician who callously slashed federal emergency funding and gutted the federal PPE stockpile.

Winner of the Goldsmith Prize for Investigative Reporting, McSwane connects the dots between backdoor deals and the spoils systems to provide the definitive account of how this pandemic was so catastrophically mishandled. Shocking and revelatory, Pandemic, Inc. exposes a system that is both deeply rigged, and singularly American.
J. David McSwane is a reporter in ProPublica’s DC office. Previously, he was an investigative reporter for The Dallas Morning News and the Austin American-Statesman. McSwane’s reporting has spurred new laws, state and federal criminal investigations, and forced belt-tightening lawmakers to invest in social programs. He has won numerous awards, including Harvard’s Goldsmith Prize for Investigative Reporting, the Worth Bingham Prize, a Scripps Howard Award, two Investigative Reporters and Editors Awards, and the Peabody.
"Revelatory... Laugh-out-loud funny. If the whole story weren’t so tragically and disgustingly real, “Pandemic Inc.” could be mistaken as the script for a “Saturday Night Live” skit. But embedded in the mirth is a wholesale indictment of this toxic brew of unfettered capitalism and greed."
—The Washington Post

"[Pandemic Inc.] isn’t so much a story about a virus as a tale about America"
—The Philadelphia Inquirer

"A deep dive...there are lessons to learn from this."
—The Daily Beast

"A justifiably indignant investigation into the financial malfeasance and outright swindling that accompanied the Trump administration’s botched handing of the Covid-19 pandemic... Revealing one outrage after another, McSwane's book should prompt congressional review and systemic reform."
—Kirkus Reviews (starred review)

"McSwane's unravelling of corporate, government, and private shenanigans during the COVID-19 crisis packs a tremendous wallop because the pandemic has impacted everyone to various degrees."
—Booklist (starred review)

"[An] eye-opening investigation...Lucid analysis and dogged reporting make this a startling exposé of how unfettered capitalism, startup culture, and government corruption exacerbated the worst effects of the pandemic."
—Publishers Weekly

"Pandemic, Inc. is a triumph of investigative reporting and a rollercoaster of a story. With blunt prose and a novelist's eye, McSwane takes readers inside private jets and dirty warehouses to expose all manner of crazy and criminal enterprise— and the result is stranger than fiction."
—Ken Armstrong, Pulitzer Prizewinning reporter and coauthor of Unbelievable

"Pandemic, Inc. is a witty, angry propulsive narrative, and a profound exercise in accountability. Its lessons—how and why fraud invaded so many corners of America's crisis response—are critical to understanding why the richest nation on earth suffered so grievously in this plague. I couldn't put it down."
—Diana B. Henriques, New York Times bestselling author of The Wizard of Lies

“McSwane’s book is two vital stories of the global pandemic, masterfully woven together: An infuriating account of how ill-prepared the Trump Administration was and the often-hilarious romp into the strange world of grifters and opportunists who tried to seize advantage.”
—Jesse Eisinger, Pulitzer Prizewinning reporter and author of The Chickenshit Club

"J. David McSwane's relentless reporting could have produced a jaw-dropping work of history. Instead, the merciless fraud he exposes ensured continuing losses. Corruption spread as swiftly as the virus, and we're in McSwane's debt for exposing a horrific waste of money—and lives."
—Charlotte Bismuth, author of Bad Medicine and former prosecutor for the New York County District Attorney's office