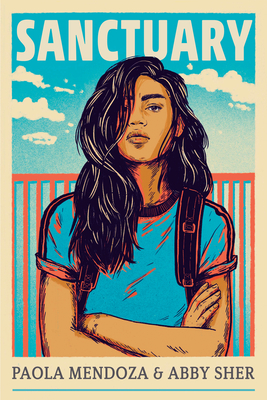 
Usually Ships in 2-5 Days
Co-founder of the Women's March makes her YA debut in a near-future dystopian where a young girl and her brother must escape a xenophobic government to find sanctuary--now in paperback!

It's 2032, and in this near-future America, all citizens are chipped and everyone is tracked. It's almost impossible to survive as an undocumented immigrant, but that's exactly what sixteen-year-old Vali is doing. She and her family have carved out a stable, happy life in small-town Vermont, but when Vali's mother's counterfeit chip starts malfunctioning and the Deportation Forces raid their town, they are forced to flee.

Now on the run, Vali and her family are desperately trying to make it to her tía Luna's in California, a sanctuary state that is currently being walled off from the rest of the country. But when Vali's mother is detained before their journey even really begins, Vali must carry on with her younger brother across the country to make it to safety before it's too late.

Gripping and urgent, co-authors Paola Mendoza and Abby Sher have crafted a narrative that is as haunting as it is hopeful in envisioning a future where everyone can find sanctuary.
Paola Mendoza is an author, film director, activist, and artist working at the leading edge of human rights. A co-founder of the Women’s March, she served as its artistic director. Her writing has appeared in The New York Times, Huffington Post, Glamour, Elle and InStyle. Paola is a co-founder of The Resistance Revival Chorus, The Soze Agency and The Meteor.


Abby Sher is an award-winning writer and performer. She is the author of Miss You Love You Hate You Bye, All the Ways the World Can End, Breaking Free, Amen, Amen, Amen: Memoir of a Girl Who Couldn't Stop Praying, and Kissing Snowflakes.
Praise for Sanctuary:
A 2022 Garden State Teen Book Award Nominee (NJ)
A 2021-2022 Green Mountain Book Award Nominee (VT)
A 2021 Bank Street Best Children’s Book of the Year
A 2021 YALSA Best Fiction Book For Young Adults
A 2020 School Library Journal Best Book of the Year
A 2020 Kirkus Reviews Best Book of the Year
A Teen Vogue Book Club Pick

“Mendoza and Sher’s descriptions of emotional trauma are heart-wrenchingly raw. (When she was 3, Mendoza herself emigrated from Colombia to America with her mother and younger brother.) A story of survival and hope, Sanctuary is a gripping work of fiction, with a message about xenophobia that’s rooted in a scarily real world.” —New York Times

★ “This searing near-future dystopian novel . . . [uses] a speculative lens to lay bare the trauma and anguish that migrants to the U.S. can experience as well as the human capacity for survival. Though the novel’s unflinching honesty and real-world parallels deliver uncomfortable truths, its propulsive narrative and its message of hope and resilience will carry readers through.” —Publisher Weekly, starred review

★ “In their portrayal of Vali’s family’s quest for safety, the authors beautifully mirror the treacherous, painful, and terrifying treks involving natural and human threats that migrants to the U.S. undertake as they traverse continents and oceans…Wrenching and unmissable.” —Kirkus, starred review

★ “[This] stunning work of YA dystopian fiction . . . is a triumph in its genre and so politically astute that it sears.” —School Library Journal, starred review

“This fast-paced drama depicts the trauma of Vali’s journey in an unflinching, heart-wrenching way that can feel all too real and timely.” —The Horn Book

“The all-too-possible future in this suspenseful dystopian novel amplifies the undocumented immigrant experience in the U.S.” —Booklist