Creativity Exercises: Emancipatory Pedagogies in Art and Beyond (Paperback) 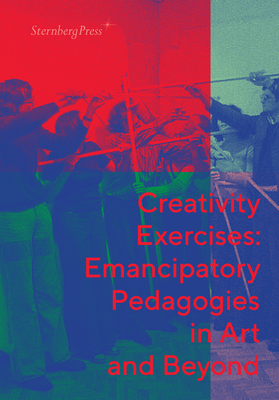 Creativity Exercises: Emancipatory Pedagogies in Art and Beyond (Paperback)


Email or call for price.
A collection of texts, historical and contemporary, on radical pedagogy in the arts.

How do people learn, what do they know, and how does it influence their personality, their behavior, and their position in society? These questions were the focus of the research project and exhibition series entitled "Creativity Exercises" between 2014 and 2016, which displayed historical and contemporary art projects experimenting with alternative forms of learning, spanning three exhibition stations: Galerie für Zeitgenössische Kunst Leipzig, tranzit.hu in Budapest, and the Museum of Modern Art in Warsaw.

The book contextualizes the Creativity Exercises--an amateur art course led by neo-avant-garde artists Miklós Erdély and Dóra Maurer in Budapest from 1975 to 1977--within the postwar intellectual networks that connected artists, architects, educators, sociologists, and other socially engaged professionals, fostering the exchange of ideas and concepts and making connections between different fields of knowledge. The first part of the publication consists of historical texts translated into English for the first time, including the exercise descriptions that functioned as the curriculum for the Creativity Exercises, studies written on the methods employed in the Creativity Exercises course, and parallel models for progressive pedagogies and art education. In the second part of the book, newly commissioned essays offer historical and transnational context for the "case study" of the Creativity Exercises course. The impact that such "creativity exercises" had on aesthetic, educational and institutional concepts, and the impulses for participation, co-creation, knowledge production and exchange that they continue to give--even beyond the realm of art--are the central themes of the book.

Contributors
László Beke, Ildikó Enyedi, Miklós Erdély, Dóra Maurer, Ferenc Mérei and Tamás St. Auby, Éva Forgács, Janna Graham, Dóra Hegyi, Sándor Hornyik, Zsolt K. Horváth, Emese Kürti, Zsuzsa László, Marion von Osten, Axel Wieder
Dóra Hegyi is a curator and critic who lives and works in Budapest, Hungary.
Zsuzsa László is a researcher, curator, and art critic based in Budapest, Hungary. She is a lecturer at the Intermedia Department of the Hungarian University of Fine Arts, and at the Institute for Art Theory and Media Studies, ELTE, Budapest.
Franciska Zólyom (1973) is an art historian and curator; she has been the director of GfZK--Museum of Contemporary Art Leipzig since 2012.