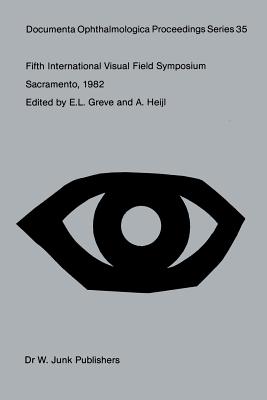 This is book number 35 in the Documenta Ophthalmologica Proceedings series.

The 5th International Visual Field Symposium of the International Peri- metric Society was held on October 20-23, 1982, in Sacramento, California, before the joint meeting of the International Congress of Ophthalmology and the American Academy of Ophthalmology. A majority of the members of the International Perimetric Society took part in the meeting together with many guests. The topics of the symposium were: glaucoma: correlation between the visual field and the optic disc; the visual field in low-tension glaucoma; neuro-ophthalmology and ergo-perimetry. Apart from this there were many papers on automated perimetry and general topics. The papers concerning the correlation of optic disc and visual field dealt with several aspects: peripapillary atrophy, defects in the retinal nerve fiber layer, fluorescein angiography and the characteristics of the glaucomatous excavation itself. New and interesting findings were presented showing that the careful, detailed observation of the disc and peripapillary area is re- warding. The visual fields in low-tension glaucoma were studied extensively by four groups. Various approaches to the problem have led to some differences in results, which were extensively discussed. In the general glaucoma session the visual fatigue phenomenon was dis- cussed extensively; apparently conflicting results were demonstrated re- garding the stability of contrast threshold measurements during one and the same test session in glaucoma. The relationship between the visual field and the performance at the working place was considered in the session on ergo-perimetry.