Education for Death: The Making of the Nazi (Paperback) 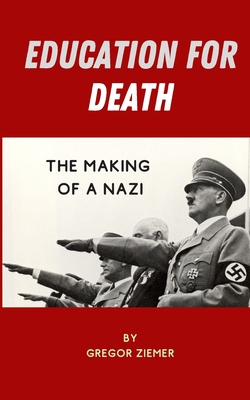 Education for Death: The Making of the Nazi (Paperback)


Email or call for price.
This startling book will explain to those who are puzzled by the peculiar mentality of the average Nazi as to how he got that way. The fanatical zeal with which he lays down his life for Hitler can only be understood in the light of the training he has received since early childhood in an educational system which, under Hitler, became a mere auxiliary of the German army and was governed by the same iron discipline. "The German school in the Third Reich is an integral part of the National Socialistic order of living. It has the mission, in collaboration with other phases of the Party, of fashioning and molding the National Socialistic Being according to Party orders." These are the words of Nazi Minister of Culture Bernhard Rust as they appear in the official Teachers' Manual. How have such ideas of education been put into practice? What are the techniques by which the Nazis indoctrinate the youth in order that the boys may become zealous soldiers and the girls equally zealous breeders for Hitler? It is a fascinating story, told by an American teacher who spent many years in Germany both as a newspaper correspondent and as director of the American Colony School in Berlin. Dr. Ziemer was afforded unusual opportunities for studying firsthand all phases of Nazi education, from prenatal homes for unmarried, sterilization clinics, initiation rites performed in the dead of night in historic medieval castles, and the conventional classroom where everything was dominated by the same fanatical devotion to the Fuehrer. Dr. Ziemer's book is carefully documented from Nazi textbooks, military manuals for the young, Hitler song books, and many other works, many of which he smuggled out of Germany. After many long years of being out of circulation, this critical book is now being reprinted by a relative of the author so that we can learn from the evils of the past to hopefully prevent the evils of today. We must guard our children's education.