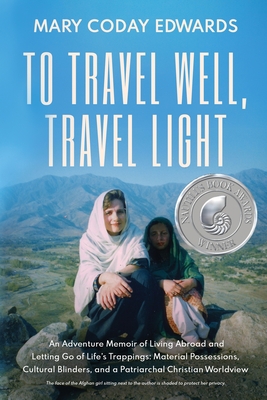 As a young mother, Mary moves from the US to Peshawar, Pakistan, with her family to help her Afghan friends rebuild their country, only to painfully watch her patriarchal Christian worldview tumble down and be rebuilt with soul-driven goals and values.

To Travel Well, Travel Light is a two-part memoir of an outward journey and an inward journey. Part 1 tells the story of the joys and pitfalls of living and working abroad with children in tow. A USAID program brought educated young Afghan men to the Midwest to instruct them in public administration. Mary and Mike befriended them through a community friendship program, and these mujahideen persuaded this adventurous family to move to Peshawar.

They lived in Pakistan instead of Afghanistan because of security concerns. But with Peshawar's ultra-conservative honor code of Pushtanwali, men threw rocks at Mary because of her exposed blonde hair, and she traveled through Pakistan's tribal territory veiled and disguised as a good Muslim woman.

She worked for an Afghan NGO in post-conflict reconstruction projects inside Afghanistan, and Mike administered the Afghan Eye Hospital in Peshawar. Their older son finished high school in Peshawar through a university distance-learning program and learned to hang glide, grew fluent in the Pashtu language, and met young people from all over the world. Their younger son attended pre-school with children from around the globe and picked up language peculiarities, such as calling an eraser a "rubber".

In Part 2, Mary narrates the crumbling of a patriarchal, Christian worldview that no longer served her and the creation of its replacement.

This section opens in Indonesia where the family moved after living eight years in Pakistan. The author worked as an editor for Indonesia's newspaper The Jakarta Post, and Mary toured and wrote about a rehabilitation and release sanctuary for majestic hawks and eagles located on one of the nation's 17,000 islands. Rescue personnel ensured that these birds of prey did not become dependent upon humans and thus unable to survive in the jungles upon their release.

Mary compares the dangers of domestication of wild birds with Clarissa Pinkola Est s' interpretation of the Red Shoes Fairy Tale. Dr. Est's explains how a woman can be metaphorically captured through coerced cultural conformity, overly domesticated as she tries to fit in, and then when she is free, goes feral. When feral, she is vulnerable to various wounding traps.

Mary uses Dr. Est s' tale as a metaphor for her own life. In Chapters 19 to 23, she recounts how she was "captured" as a child. When set free in her late teens, she made unhealthy choices before joining the Jesus Movement, which morphed into the trap of patriarchal Christianity-a system of belief that denied adult women their agency and kept them as children.

Just as the hawk and the eagle needed a safe space to recover, Mary narrates in Chapters 24 to 30 how she found her safe space during her global travels in Pakistan, Tanzania, Kenya, and Indonesia. She dug out the buried parts of herself that had gone underground and, with that as her foundation, created a life-affirming worldview. Her initial guides on the way were psychiatrist Carl Jung and the sixteenth-century monastic John of the Cross, both of whom affirmed her inner knowing.

A wise South African professor led her to more guides: physicists-turned-theologians Ian Barbour and John Polkinghorne and their research and comparison of religion and science. Through them she gained new ways of considering the natural and spiritual realities. These tools included critical realism; the use of metaphors, models, and paradigms in science and religion; and the philosophical implications of quantum mechanics.

This family traveled and worked around the world for almost 20 years before settling back in the States in 2011.