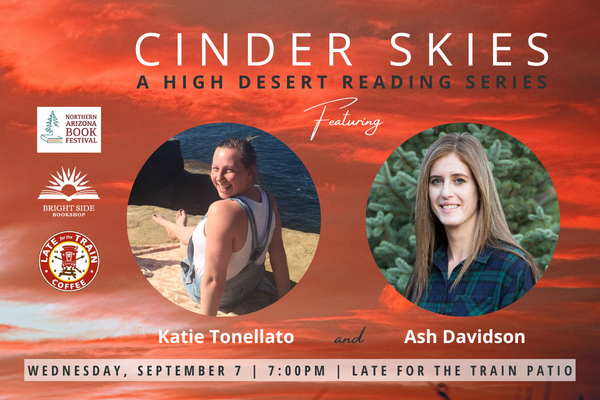 Bright Side Bookshop is partnering with the NAU Department of English and Late for the Train to host Cinder Skies: A High Desert Reading Series featuring Katie Tonellato and Ash Davidson on Wednesday, September 7 from 7:00 to 8:30 PM AZT.

This event is free and open to the public.

KATIE TONELLATO was born and raised in Tacoma, Washington. Currently, she is studying to get her MFA in Creative Writing at NAU. She has volunteered to edit for cultural magazines, run book clubs for homeless youth, and has been an editor and staff member for Northwest Boulevard, Willow Springs, and is the current Managing Editor of Thin Air Magazine. She was a runner-up for the WritersAdvice Flash fiction contest in 2021 and has been published in Hive Avenue and Northwest Boulevard.

ASH DAVIDSON was born in Arcata, and lived in Klamath, California until she was three. She attended the Iowa Writers’ Workshop and her work has been supported by the Arizona Commission on the Arts and MacDowell. Her debut novel, Damnation Spring (Scribner 2021), received the Reading the West Book Award for debut fiction, was named a finalist for the Chautauqua Prize and the Mark Twain American Voice in Literature Award, and was named a best book of the year by the Los Angeles Times, the San Francisco Chronicle, Newsweek, Kirkus, Amazon, and others, a best California book of the year by the New York Times, and a Washington Post notable book. She lives in Flagstaff, Arizona, where she works as the communications director for the Grand Canyon Trust, a conservation nonprofit.